In close to the mountains to the sea Kobe, also from downtown, such as the Sannomiya Center Town Kobe, there is a spot that you can experience the nature immediately.
As Ikuta Shrine, location and to be touched actually a natural hand, such as a facility that can see the natural dynamic, will introduce the place where you can refresh while feeling nature. 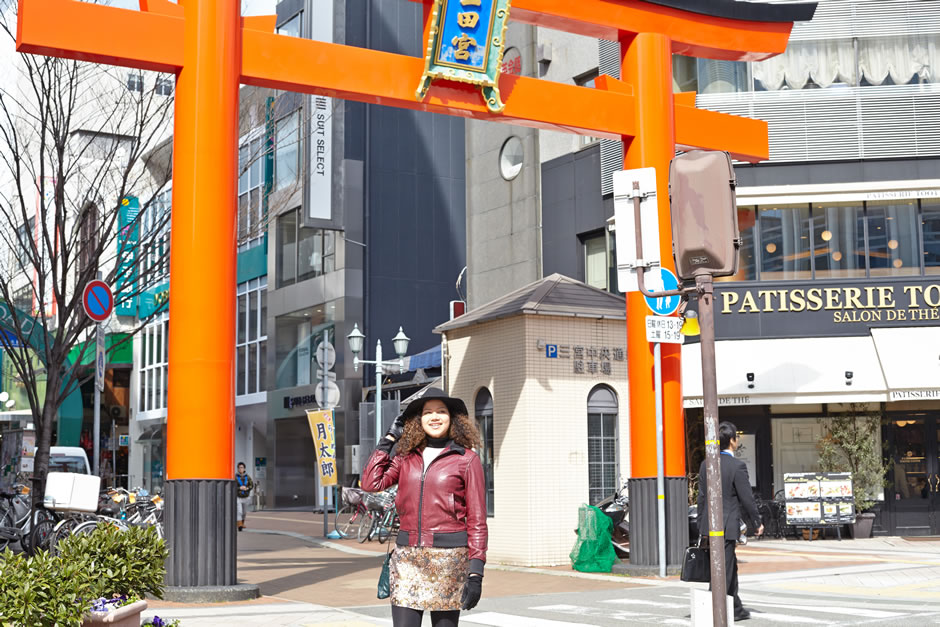 There is Ikuta Shrine where you can actually touch nature, and there are also other facilities that offer spectacular views. Let us show you some attractive places to go when you want to feel refreshed by feeling nature.

Epi’s comments:Walking along Centergai street, I saw many wonderful shops. Then, I found a big, orange Tori gate which led me straight to a beautiful traditional shrine called ‘Ikuta’. 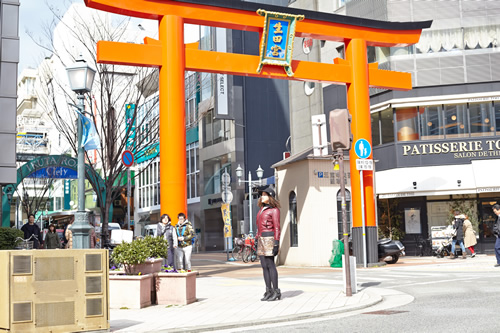 There is a torii gate called “Ichi-no-Torii” where the approach begins entering to Ikuta Shrine. Many shops are lined up on both sides and, at first glance, you may not realize it is the approach to the shrine. But you can’t miss the sign that says Ikuta gū (Ikuta Shrine) on the torii gate. 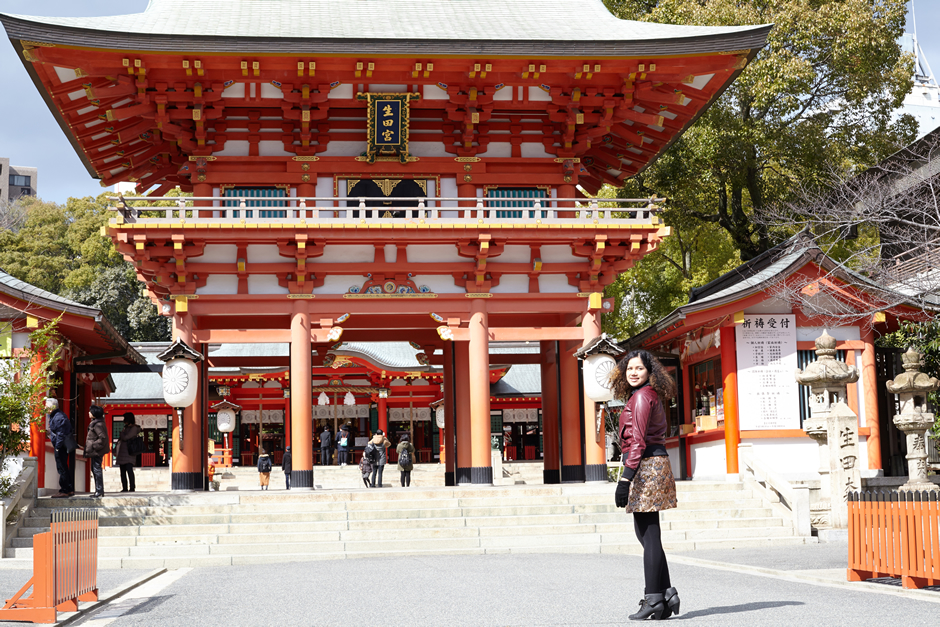 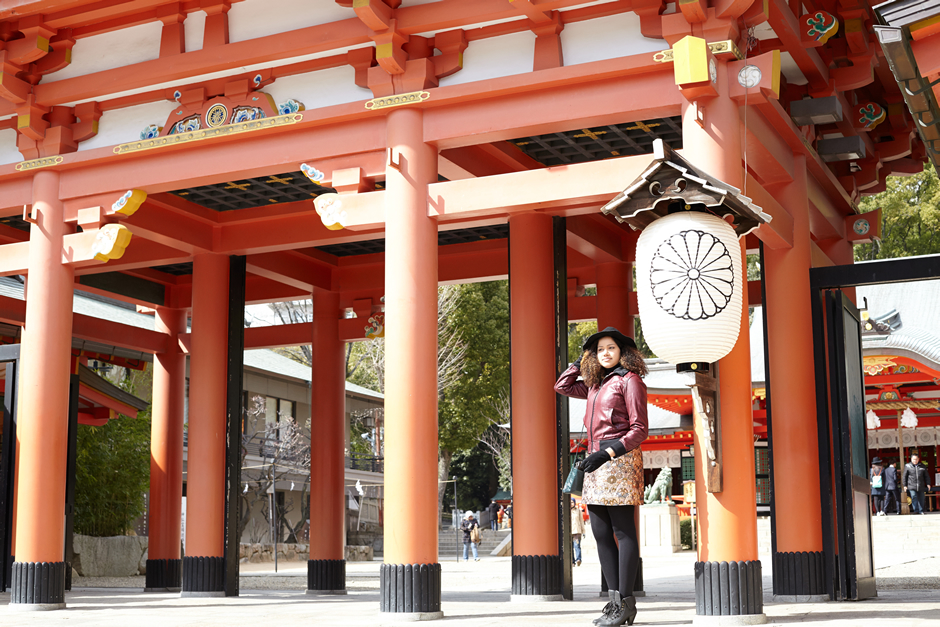 We visited Ikuta Shrine located in the north side of Kobe Sannomiya Center Gai Shopping Street. The whole area of present day Chuo Ward in Kobe City was once the shrine’s property, and the name Kobe is believed to have originated from the shrine.
The shrine is not so far from the biggest station of Kobe “Sannomiya Station,” and also from Higashi Mon Suji where many eating places are lined up on the streets.
Ikuta Shrine is characterized by its big torii gate, the main shrine building, and a purification trough. We could also find Ebisu Shrine, Inari Shrine, the sacred camphor trees, votive offerings (“ema”), and sake barrels.
There is hōchō zuka, a kitchen knife mound where old worn knives are buried, which was created with donations from local restaurants and food related companies. There is also a monument built as a memorial to the Noh song “Ikuta Atsumori” and another monument built to pray for the earthquake recovery. You can always see many shrine visitors buying an amulet here at Ikuta Shrine.

Epi’s comments:Before entering the shrine, I cleansed my hands before heading in. It was interesting to learn about the culture and the offering of sake at the shrine. 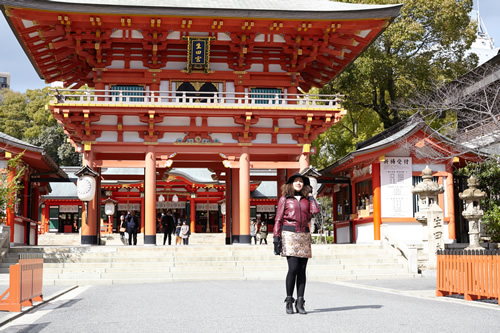 Located on the north side of Kobe Sannomiya Center Gai Shopping Street, it is not so far from Sannomiya Station, the largest station in Kobe. It is an ancient and honorable shrine where the name Kobe is said to have originated. It is characterized by the big torii gate, the unique main shrine building, the purification trough, Ebisu Shrine, Inari Shrine, the sacred camphor tree, the votive offerings and sake barrels. The knife mound hōchō zuka and the monument to pray for the earthquake recovery also attract the visitors’ attention. 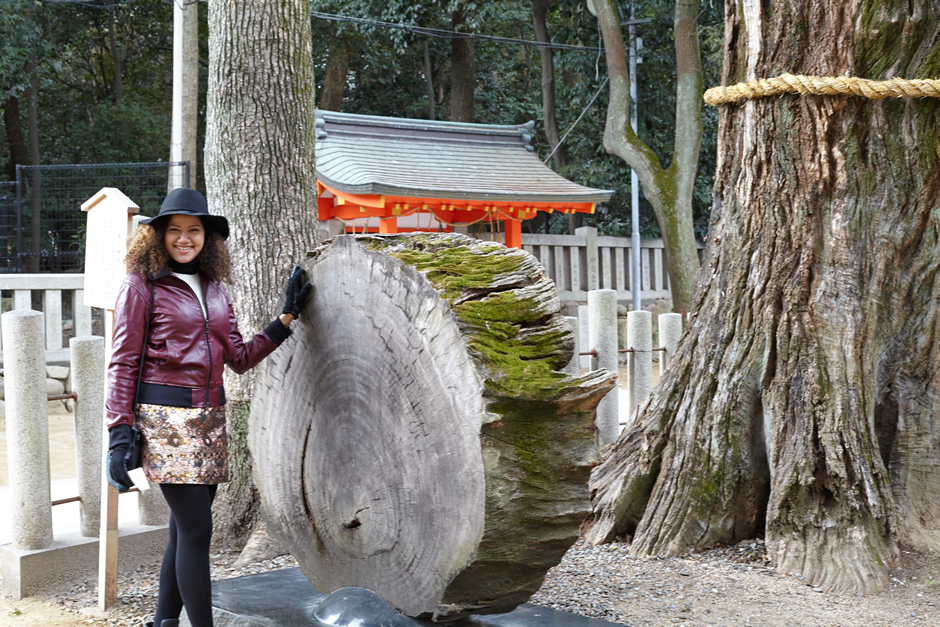 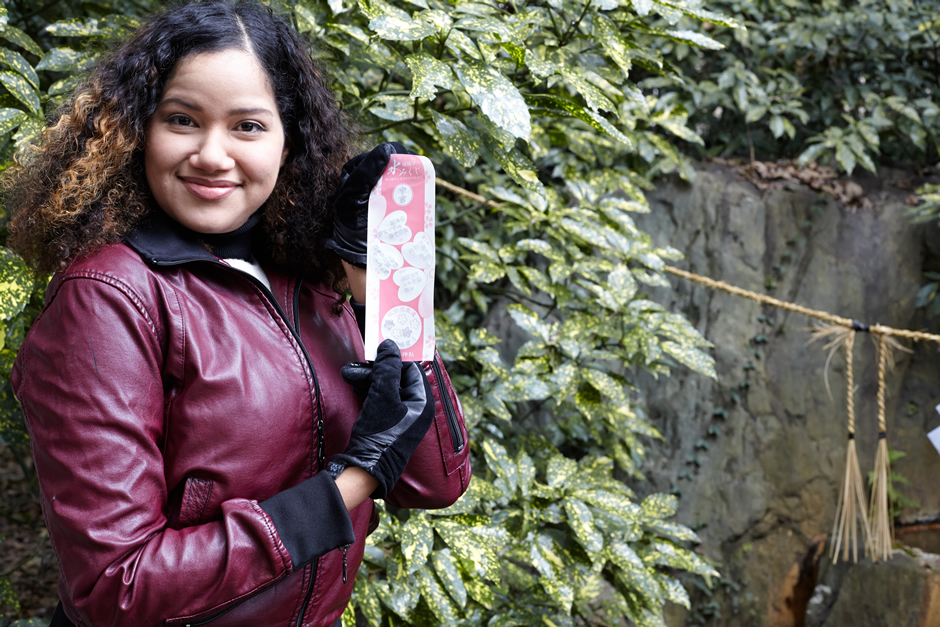 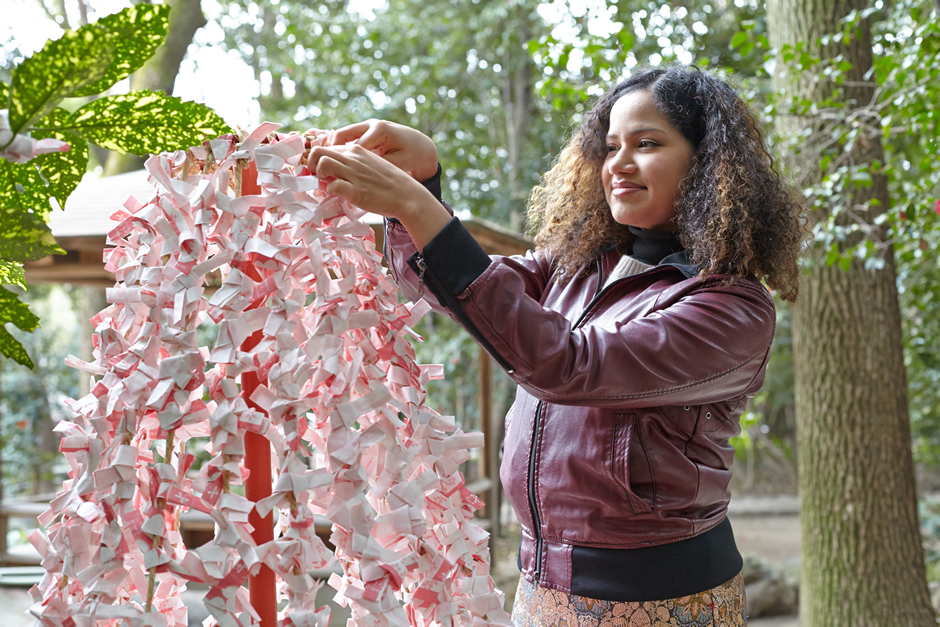 Ikuta Shrine is famous for being a matchmaking shrine. There is a special kind of omikuji paper fortune called mizumikuji that can be obtained for a fee at the shrine office. When you place this omikuji in the small water-flowing pond found in the Ikuta Forest, your fortune will appear on the paper. After reading your fortune, this paper should be tied to the stand. Epi was able to spend a relaxing time drawing omikuji and viewing the sacred camphor trees.

Epi’s comments:Behind the main shrine there is a lovely trail full of tall trees and ponds. The huge trees that were hundreds of years old were breathtaking. I felt so small next to them. At the shrine, I bought a written oracle to discover my luck for this year. Looks like this year, I won’t have good luck or bad luck.

Sacred camphor trees stand in chinju no mori, the sacred groves, on the north side of Ikuta Shrine, and this forest is a place for relaxation for the shrine visitors. There is a small pond with flowing water where you can dip your mizumikuji and also a stand onto which you tie your paper fortune. 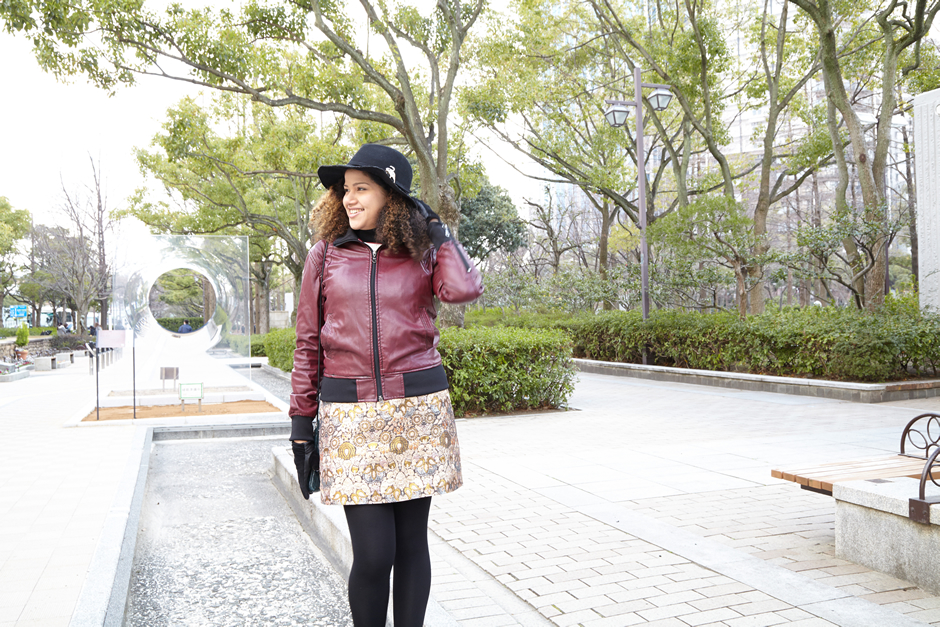 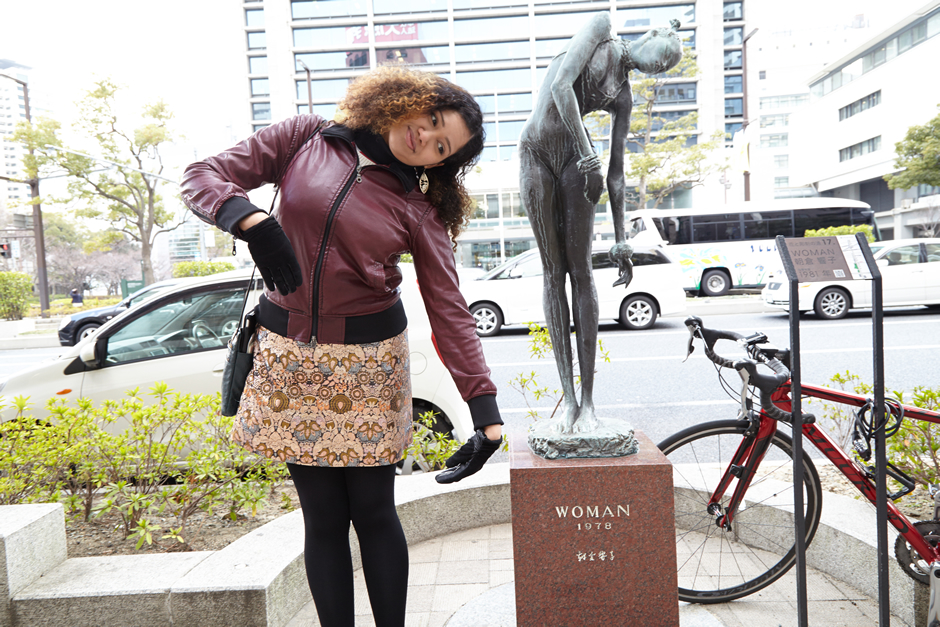 We stopped by Higashi Yūenchi Park just south of Kobe City Office.
This area was an old foreign settlement, and during its establishment a park for foreign residents was constructed for sports activities. This park is believed to be the place from where sports activities such as baseball, rugby, soccer and bowling were introduced in Japan.
Today, it is known to many people as the place that hosts the Kobe Luminarie. It is also the location of monuments for the Great Hanshin Earthquake such as the memorials and “Monument for recovery, 1.17 Light of Hope.”

Epi’s comments:I felt close to nature even in busy Sannomiya town. Not far from Centergai, I took a short stroll over to the lovely Higashi park which had beautiful public art to enjoy. 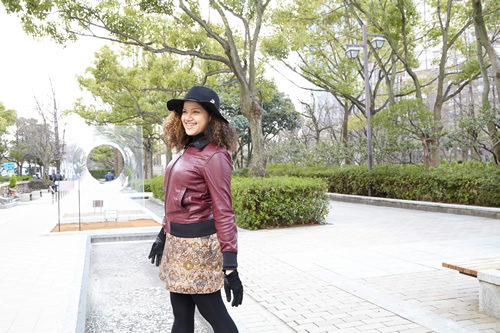 We stopped by Higashi Yūenchi Park just south of Kobe City Office.
This area was an old foreign settlement, and during its establishment a park for foreign residents was constructed for sports activities. This park is believed to be the place from where sports activities such as baseball, rugby, soccer and bowling were introduced in Japan.
Today, it is known to many people as the place that hosts the Kobe Luminarie. It is also the location of monuments for the Great Hanshin Earthquake such as the memorials and “Monument for recovery, 1.17 Light of Hope.” 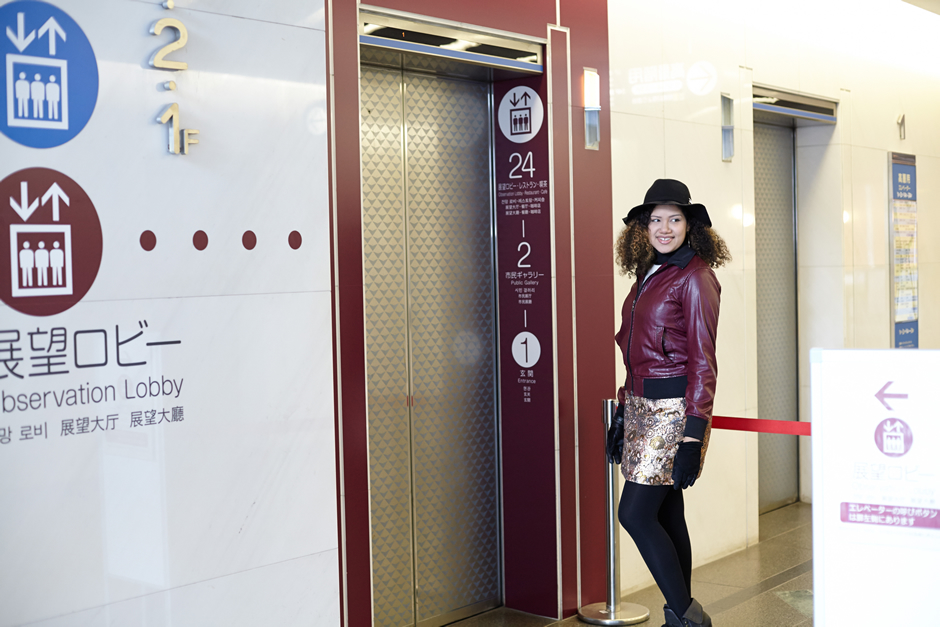 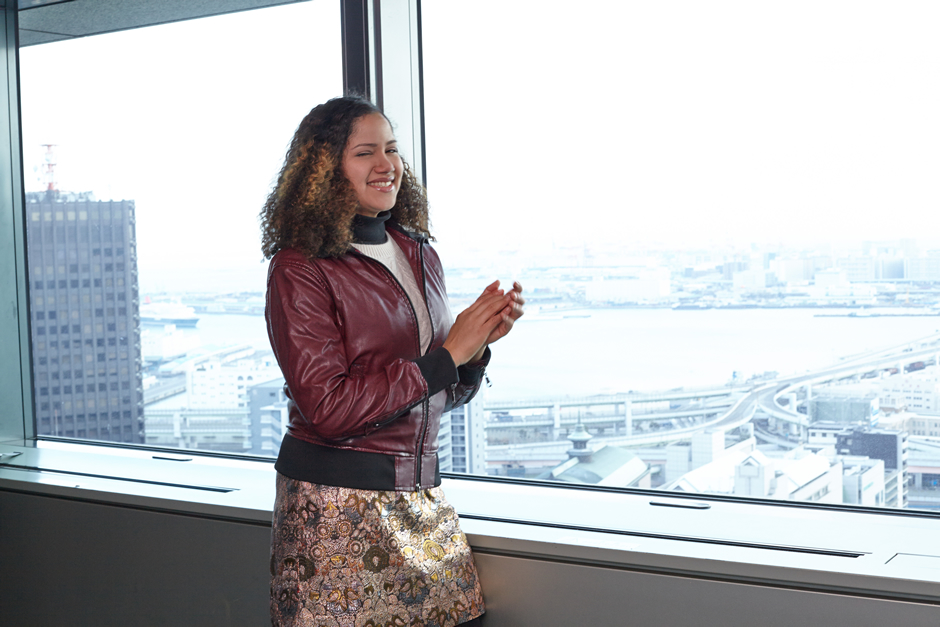 Take the elevator of Kobe City Office all the way up to 24th floor! This is right next to the restaurant and coffee shop and it’s a free observation lobby. Epi was excited viewing the dynamic landscape of Kobe City from 100 meters above, the mountains to the north, and the ocean to the south. It’s a little-known good place that even Epi, who has been living in Kobe, didn’t know about.

Epi’s comments:After my peaceful time at the park, I walked across the street and up to the 24th floor of City Hall’s Observatory (at no cost). The spectacular sea views were breathtaking as well as the rolling green mountains seen from the other side.

This is a free observation lobby on the 24th floor of Kobe City Office. During the Kobe Luminarie event, you can get a view of the illumination from the top.
The observation lobby offers not only a view of Kobe City, but also the ocean and mountain views from 100 meters above. You can see different sceneries at different times of the day, and you can even sense the seasons.

Amongst modern buildings and shops at Kobe Sannomiya Center Gai Shopping Street, the jizō statue stands believed to have been remaining since ancient times.
Despite being in the middle of the city, you can have a relaxing moment by viewing this scenery of ancient Japan. Epi tossed a coin into the osaisen coin box and quietly put her palms together.

There is a jizō statue just next to Kyomachi Suji Building.
Although the area may be full of fashionable shops, tradition hasn’t been forgotten.
During the Jizō Festival, the area is decorated with paper lanterns and many children gather here. 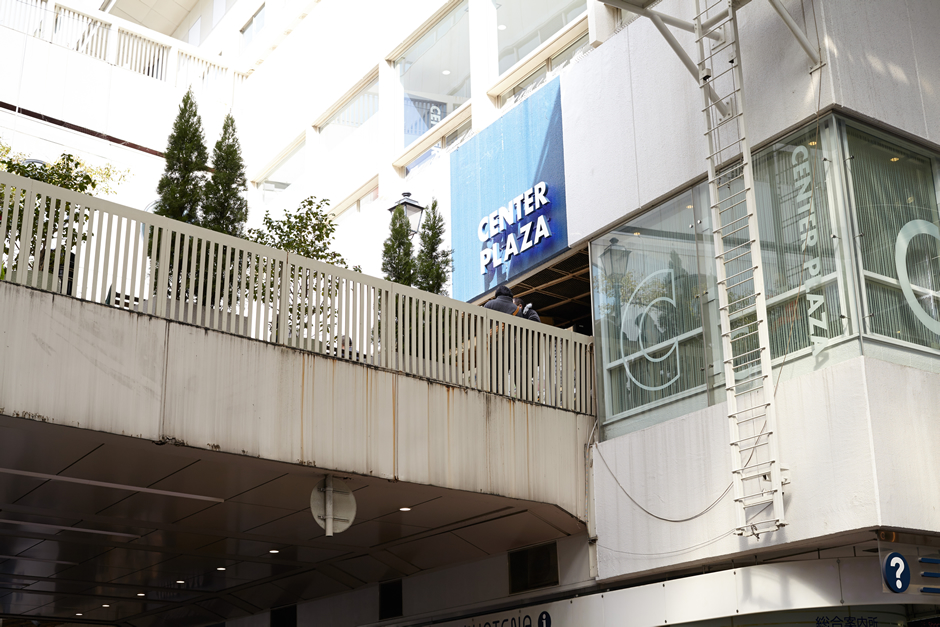 There are several bridges that connect the second floor of buildings at Kobe Sannomiya Center Gai Shopping Street. One of them which is connected onto Ikuta Suji is decorated with many plants and receives comments like, “This is just like Machu Picchu!” or “It’s like a hanging garden!”
Epi, too, was amazed watching from below.

Epi’s comments:Even in the center of Centergai street there I relaxed by the trees of Sannomiya’s own “Machu Picchu”.. 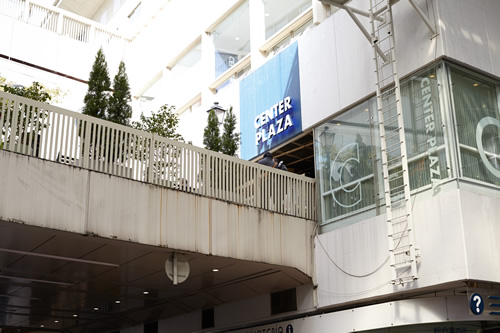 Implantation of the passage (known as Machu Picchu)

The Center Plaza and Center Plaza connecting the west hall corridor planted many plants, it has become a place of relaxation of the people that have been Raimachi. Etc. is also visible thing to like a hanging garden when viewed from the bottom, but some people likened interesting as "Machu Picchu like".